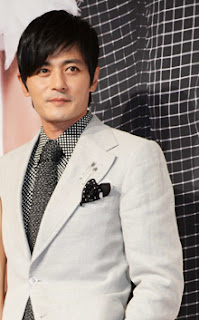 Actor Jang Dong-gun is returning to primetime TV drama after a 12-year absence. He will appear in a weekend soap called "A Gentleman's Dignity," which is scheduled to air from Saturday night on SBS.

In the soap about the careers and love lives of urban professionals, he plays the role of an architect in his 40s who wants to remain single.

In a press release on Wednesday, the actor said he felt a little awkward upon returning to television some 10 years after his last appearance in MBC's hit drama "All About Eve." But now he is enjoying filming the soap and feels comfortable with the transition.

It is the first time for Jang to star alongside Kim Ha-neul. He said the two quickly built a strong rapport both on screen and off.

Source: Chosun Ilbo
Posted by myplot'blog at 6:49 AM

wow, he is comeback after 12 years not appear in TV...congrats Dong Gun-shi

I wrote a review on this drama recently on my blog :) Love this drama!
crazyaboutdramas.blogspot.com