Song Seung Hun to Star in Drama 'My Princess' 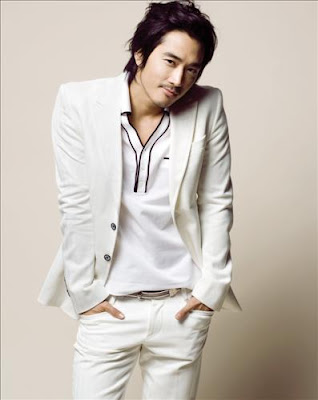 The drama is written by Kim Eun Sook, who has written famous drama scripts such as “Lovers in Paris,” “On Air,” and “City Hall,” and the producer and broadcasting company have not yet been decided. The agency said, “He will begin filming from August after finishing casting, and the drama will be filmed with the target date for airing in the second half of this year.”

Song Seung Hun revealed his mind, saying, “I am highly anticipating this drama because I might be able to show a different image from the tough and manly image that I have shown so far.” He appeared in the MBC TV drama “East of Eden” last year and is now working on the final stages of filming the movie “Outlaw.”
source: KBS Global
Posted by myplot'blog at 2:47 AM No comments: 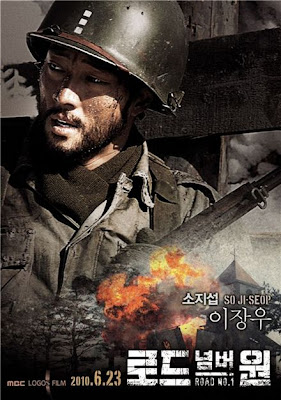 The official posters for upcoming television series "Road No.1," starring Hallyu stars So Ji-sub and Kim Ha-neul, were unveiled today.

The show's poster is in three different versions featuring each of its main characters; Jang-woo (played by So), Soo-yeon (played by Kim) and Tae-ho (played by Yoon Kye-sang).

The war drama has been garnering much hype prior to its airing due to its blockbuster scale and star-studded cast, led by So who is making his comeback to the small screen since last year's "Cain and Abel" (SBS). 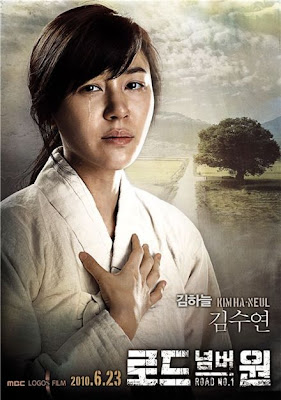 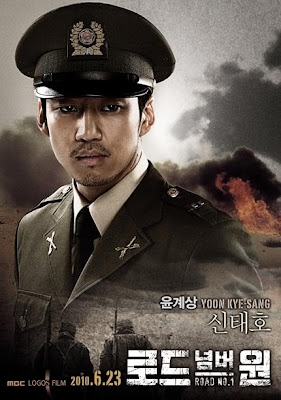 Actress Kim Ha-neul portrays a strong-willed doctor in the series, who sacrifices her love for So's character to provide for her family.

Yoon Kye-sang, a former member of boy band G.O.D. who has crossed over to acting, plays an elite military officer named Tae-ho. His character falls in love with Kim's character only to be turned away when her first love, played by So, comes back alive from the war.

"Road", produced on a whopping KRW 13 billion won budget, is an epic drama set during the Korean War.

It is set to premiere in Korea on June 23.

E Ji-ah locked in as female lead for "Iris" sequel 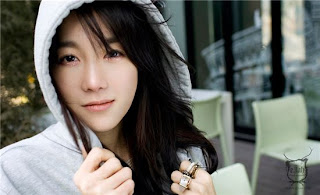 "E will be playing the role of Han Jae-hui, a special agent under the European branch of the national anti-terror services," explained a producer with Taewon.

He went onto explain that she was chosen as one of the lead female characters even though she is new to the entertainment industry because she showed great strength and charisma with her previous roles in MBC's "The Story of the First King's Four Gods" and "Beethoven Virus."

Taewon is eyeing the latter half of this year for the airing of "Athena," about terrorist acts and threats against the Korean Peninsula and the world.

It will go into production starting in June in Italy and Switzerland and continue on into six other countries including Singapore and New Zealand.

E, 29, made her debut in the 2007 historical epic "Four Gods" as Suzini, the love interest of Hallyu star Bae Yong-jun. She also appeared in the big screen with "My Love, Ugly Duckling" alongside actor Kang Ji-hwan. 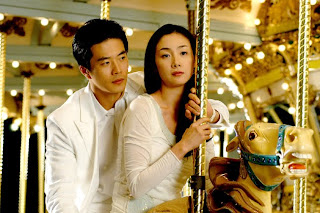 Song-ju (Kwon Sang-woo) and Jung-suh (Choi Ji-woo) were destined to be together even before they were born. Both of their parents were close friends, they have almost grown up together since their childhood. They even looked alike as if they were twins. They even try not to be sick because one may worry the other. Song-ju, being the only son of a multi-national cooperation, begins his business training and prepares himself to study abroad. Before Song-ju’s departure, Jung-suh and Song-ju exchange necklaces as if they are exchanging parts of their souls. Time passes and Song-ju returns from his studies to get back with Jung-suh. But a tragic accident happens. Jung-suh gets hit by Yoo-ri’s car and becomes amnesiac. Jung-suh doesn’t remember Song-ju, who she loves the most and is not even able to identify his existence. She does not even remember her name… 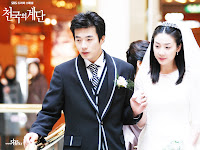 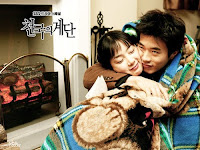 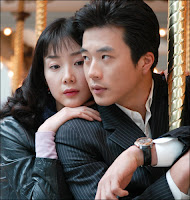 Soo Ae to Star as Double Agent in ‘IRIS Season 2’ 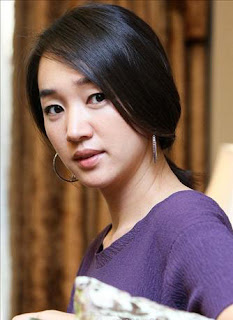 Actress Soo Ae is cast as the heroine of the spy-action drama “IRIS Season 2 - Athena: Goddess of War,” the production company Taewon Entertainment announced on April 9.

In the drama “IRIS Season 2 - Athena: Goddess of War,” which is a spin-off of the original IRIS drama, Soo Ae will play a double agent, Yoon Hye In. She belongs to National anti-Terror Service (NTS) as a female profiler and also takes a role within a secret organization as a special agent.

Soo Ae has revealed her pure and graceful beauty until now, but this time, she will transform into a cold-blooded spy and will perform difficult action scenes in the drama.

As soon as she finishes filming the movie “Late Night FM,” she will join the shooting of the drama.

The drama already cast Jung Woo Sung and Cha Seung Won as the lead actors before it cast the female lead. As it has now finished casting the female lead, the drama “IRIS Season 2 - Athena: Goddess of War” will begin filming in June.

source: KBS Global
Posted by myplot'blog at 3:38 AM No comments: 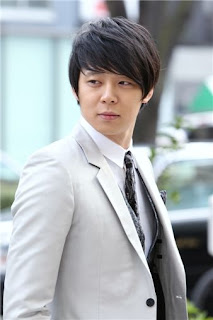 Micky Yoochun of Korean idol group TVXQ has been set to star in an upcoming television series tentatively titled "Sungkyunkwan Scandal," according to the show's promoter YTREE MEDIA on Wednesday.

YTREE announced in a press release that the pop idol has been cast in the historical drama, set in the Chosun Dynasty, to play a Confucian scholar named Lee Seon-joon who falls in love with a woman in disguise as a man.

"I had so much fun reading the synopsis," the singer-turned-actor was quoted as saying. "It is an honor to play such an attractive character for my first acting role."

The singer expressed his ambitions for his solo acting debut, saying "I am actually very excited and nervous too because this is my first drama. I am going to learn a lot of things, work hard and do my best in acting."

The historical drama, based on a best-selling novel by Korean writer Jeong Eun-kwol, will go into shoot early next month and air later during the year.

Micky Yoochun, whose real name is Park Yoochun, debuted in 2004 as part of five-member boy band TVXQ. The group became one of the most phenomenal K-pop acts in the country and throughout Asia, selling numerous records and recently making history in the Japanese music scene.

TVXQ has been making headlines this week for announcing over the weekend that they will no longer be working in Japan as a group and that the members will go their separate ways to pursue individual careers.

The band had officially quit working as a group in Korea last July due to a legal dispute between three of its members -- Xiah Junsu, Hero Jaejoong and Micky Yoochun -- and talent agency SM Entertainment over their 13-year exclusive contract. 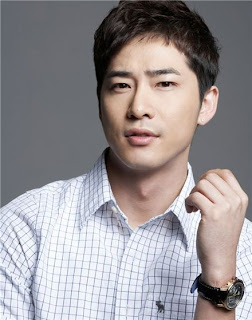 Korean actor Kang Ji-hwan has been tapped to play the male lead role in upcoming SBS drama "Page 1," according to the drama producer's Core Contents Media on Friday.

"Kang was chosen because he did an impressive job in the movies 'My Girlfriend Is An Agent' and 'Rough Cut,'" Core Contents CEO Kim Kwang-soo was quoted as saying in a press release.

"We also determined that the recent controversy regarding Kang and his former agency is not an issue," Kim explained, addressing an ongoing legal spat between the two parties over the actor's working contract.

This will mark Kang's comeback to the small screen for the first time in two years, where he will play the role of Lee Jin-soo, a writer who rose to stardom at an early age because of his bestsellers.

Actress Park Si-yeon will also appear in the drama, playing the role of a publication house CEO who Jin-soo is in an undefinable relationship with.

"Page 1" will be helmed by director Pyo Min-su, whose other works include hit series "Full House" and "The World That They Live In."

"Page 1" will go into shoot beginning early April and is set to premiere after current Monday and Tuesday drama "Oh! My Lady" ends its run.

Kang, who debuted in 2001 through the Korean version of the musical of "The Rocky Horror Show," has appeared in several TV dramas including "Be Strong, Geum-soon!" "Scandal in Old Seoul" and "Hong Gil-dong, the Hero."

He shot to stardom in Korea and throughout several countries in Asia after starring in "My Girlfriend is an Agent" alongside actress Kim Ha-neul.