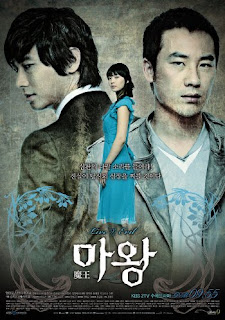 “The Devil” is a story about two men who were predestined to confront each other over a tragic incident that happened when they were young, and a woman who has psychometric powers. Through the bitter fight of its main characters and their desperate attempts to uncover the truth, this drama attempts to find answers to such questions as what is good and what is evil, and how good and bad fortune are formed.

The murder case that begins with an afterimage of one girl is completely ignored and closed quickly because of the girl’s preposterous testimony. Twelve years later, detective Kang Oh-soo (played by Um Tae-woong) receives a taro card meaning “judgment” and a letter. A brutal game begins between the culprit and the victim of the case, which began as a trivial incident 12 years ago but has snowballed into a big tragedy, and a mysterious witness.
source: http://contents.kbs.co.kr

Boys Before Flowers Stunned by Suicide

It was another setback and a major one for Boys Before Flowers as one of the actresses, Jang Ja Yun (27) who plays Sunny in the drama and makes life difficult for Jandi as part of the JinSunMi trio was found to have committed suicide in her Bundang home today.

According to local police who confirmed the suicide, " Jang Ja Yun was found to have committed suicide in her own home today. She was discovered at around 7.34pm by her sister who then called the police. We are now investigating the case and will give further updates like the reason, her will (if any), etc at a later time." The police also revealed that her approximate time of death was around 4.30pm and that she had hung herself.

Friends who knew Jang Ja Yun was shocked by her suicide and expressed, "She had a passion for acting and loved it very much. She was very much a extrovert and we never really expected that she would commit suicide." Her sudden suicide has plunged the entire Boys Before Flowers into shock with the main cast of Lee Min Ho, Goo Hye Sun, etc unable to believe what they have heard after learning of the news from their respective companies.

Everyone involved with Boys Before Flowers will be paying their respects tomorrow morning at her wake after the morning session ends. According to someone at the filming site now, "We are still filming now (10pm, KST) and it was a big shock to receive this sad news suddenly. Why do all the bad things keep happening to Boys Before Flowers?"

Jang Ja Yun graduated from Chosun University and had made her debut through a Lotte Biscuit CF and was only starting out with her acting career. She still won a bit of popularity for her small role in Boys Before Flowers despite her late debut. But it's being reported that a dispute with her present management agency and a lack of time in Boys Before Flowers had left her feeling depressed and eventually causing her to choose the wrong path 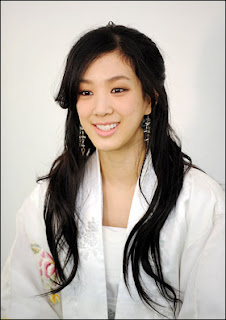 "I've never expected to be in a period drama in my life," said actress Jung Ryeo-won, 28. She makes her debut in a period drama entitled "Princess Jamyeong," to air on SBS on Mondays and Tuesdays from March 10.

Jung's role requires her to handle a dagger weighing over two kilograms -- no easy task for the slim actress. However, now she has become used to it and even put on two kilograms.

"To help immerse one's self in a period drama, it's important to remain healthy and strong," said Jung.

Some three and a half years after her debut as an actress in MBC soap opera "My Name is Kim Sam Soon," Jung is about to exercise her charms in a drama.

"Princess Jamyeong" based on a traditional Korean tale is about a love shared between three people.

Posted by myplot'blog at 5:52 AM No comments:

'F4 Special' to Air Due to Koo Injury 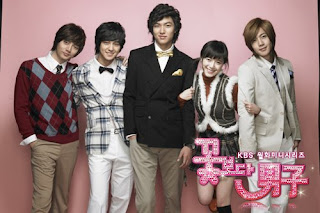 The female lead of the popular KBS 2TV's Mon-Tues drama series "Boys over Flowers," Koo Hye-seon, was involved in a car accident on Friday, dealing a blow to the filming schedule.

"Boys" will not be able to air its 17th episode as scheduled on Monday. Koo could not resume shooting on Sunday due to injuries that she sustained.

Instead, an "F4 Special Talk Show" will air Monday and the 17th episode will air Tuesday. The 17th portion was fully shot before Koo's accident.

Production agency Group8 said Sunday, "Koo had three stitches inside her mouth and is in stable condition at a hospital. Based on medical opinions and a prudent decision, we decided to air the special program. As soon as she gets well, Koo will resume shooting next week."

Koo was involved in the car accident while returning to Seoul from Changwon, South Gyeongsang province early Friday morning after a shoot. Her lips swelled up, preventing her from participating in filming.

Earlier in the drama in a diving scene, she also injured her head. Other cast members, the three Kims, have also been involved in car accidents.

The drama is gaining increasing popularity.