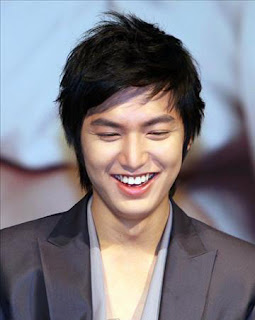 Actor Lee Min Ho, who came back to dramas after a one-year break following the KBS TV drama “Boys Over Flowers,” revealed his ambition of obtaining a "favorable evaluation for splendid acting" on his new MBC TV drama “Personal Taste,” which will broadcast its first episode on March 31.

In the production presentation of “Personal Taste” held at the Grand Hyatt Hotel on March 25, Lee said, “I have distressed myself about how to play the character in the drama. I feel pressure because I want to be praised for good acting by viewers.”

The drama “Personal Taste” tells exhilarating stories about two characters. An easygoing woman, Park Gae In (Son Ye Jin), wants to have a gay male friend, and a charismatic man, Jeon Jin Ho (Lee Min Ho) is mistaken by her to be a gay man. These two create entertaining stories while they are living together.

Lee explained the character he plays: “He is a competent architect and when it comes to work, he always aims for perfection, so much so as to be regarded as a cold-hearted person. He does not want to be interrupted nor to interrupt others.“

Jeon Jin Ho is similar to Goo Jun Pyo, which is the character he played in his previous drama “Boys Over Flowers,” in that he is also a charismatic character. Lee Min Ho continued, “It is true that the two characters have similarities, but I do not care too much to differentiate this character with that of Goo Jun Pyo. I have rather concentrated on making a character who is very much faithful to the script. If I have to compare the character to Goo Jun Pyo, Jeon Jin Ho is a mature and thoughtful person and has a pride in his work as a professional.”

Asked about his one year break, he answered, “I had a tight schedule at home and abroad after the drama ‘Boys Over Flowers,’ so I actually took a break only for three months. During the break, I had seriously agonized about how to make a comeback to dramas, and with what kind of image. In the end, I decided to play a pleasant character in a drama, since I am still young, and chose ‘Personal Taste’ as my next drama.”

Lee Min Ho entered stardom with “Boys Over Flowers,” so it is natural that he feels stress about the viewer ratings for “Personal Taste” which has to compete with other outstanding dramas such as “Cinderella’s Stepsister (KBS)” and “Prosecutor Princess (SBS)”, which will air its first episode on the same day.

Lee Min Ho commented about the viewer ratings: “Honestly, I cannot afford to care about other competitors because I am only concentrating on playing my role in the drama. But, it would be great if the ratings came to around 18 percent for the first episode. Then, if the viewer ratings increased by one percent for each episode, the ratings for the final episode would be around 34 percent, since our drama has a total of 16 episodes for the series.”

source: KBS Global
Posted by myplot'blog at 9:00 AM

You did a very great job Lee Min Ho! You should do more of these series, there are lot of fans waiting out there! Kudos!